You see the first two cases are fine, however the last case is wrong. It is a false negative, our clipping test tells us we can skip it, but visually we can see it should have been drawn.

Logical, since we tested for the corner points only.
What we should have done is test whether any part of the quad-to-draw (referred to as quad in the rest of this post) is intersecting our clipping rectangle. One way to do that is to write an intersection test for the quad with the non distorted clipping rectangle, for example through a separating axis test.

Problem is that we don’t want to do that for each quad since our panorama will slow to a crawl. So what we will be doing instead is a bounding box test.

Bounding box test
What is the bounding box for a quad? Assuming we have the four points UL, UR, LL, LR that we’ve been using in each post, the upperleft and lowerright coordinates of the bounding box around these points are given by (in actionscript pseudocode): 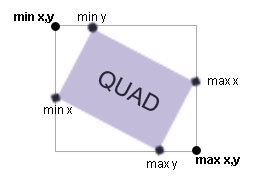 If we replace our clipping test with a bounding box intersection test between the clipping rectangle and a quad’s bounding box we will get the following results:

So we see that with a bounding box test we get the opposite from what we had with the ‘clipping-rectangle-contains-at-least-one-quad-vertex’ test: we might get false positives. In other words now and then a quad might be rendered which is outside the clipping rectangle. We don’t care. It won’t happen a lot and it’s better than not rendering false negatives.

But how do we implement a bounding box or in other words a rectangle to rectangle intersection test?
There are different options, one simple option would be to create two rectangle instances representing our rectangles and call the intersect method on them. This is bad for two reasons:

So assuming we roll our own intersection test, how does the intersection test work without sorting the points?
Intersection tests might be hard to understand (or not depending on your math skill), a lot of the explanations I’ve found online talk about overlapping coordinates, which gets hard to visualize mentally fast if we can’t even be sure which point is which.

I find this the easiest way to look at the problem: when is there no intersection?

Seeing our clipping plane has x boundaries clipLeft and clipRight and y boundaries clipTop and clipBottom, we can safely say there is absolutely no possibility of an intersection, if:

Take a look at the following image for a visual explanation, this image shows all the equations where the quad does not intersect the clipping rectangle: 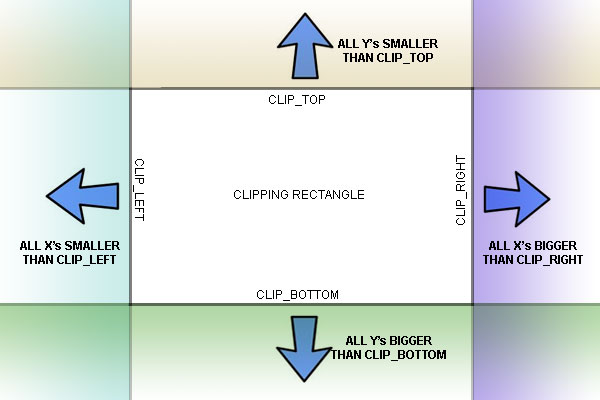 For our DistortedPlane we replace our faulty clipping test with:

but all the min/max operations are killing so we’ll do it the other way.
Next time an updated 3d Panorama in Actionscript 2 with a lot of issues fixed!