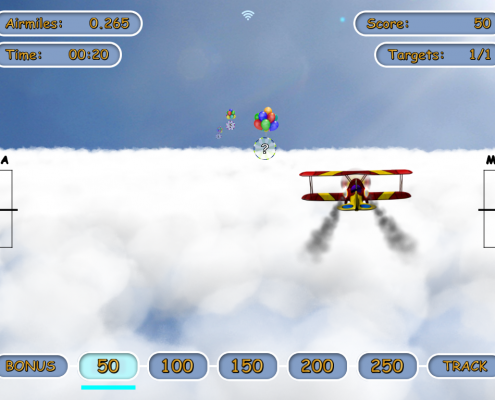 Flying High was a flash prototype made in a couple of days for the NeuroSky Headset, a biofeedback device for homeconsumers. Although it looks 3d, it’s actually a 2d game programmed in the Starling Framework using rendered spritesheets of models I made in Blender.

Stub controls since I don’t have access to your brainwaves at the moment (or do I..?):

The clouds were rendered in two steps. The texture itself was created by rendering volumetric clouds in Blender. The display in the game itself is done through screen-width quad fills whose texture scaling and offset is adjust based on the plane position and the distance to the cloud.

The clouds, boxes & plane were also modelled in Blender and rendered to sprite sheets. The plane animation is a combination of an up-down rotation from the sprite sheet and a simple left-right rotation for the banking. The smoke was implemented through a starling particle system, designed with Particle Designer.