Blog - Latest News
You are here: Home / Game Math / Why are there 360 degrees in a circle?

Although you might not expect it, we need to answer another question first.

The origin of 60 seconds per minute, 60 minutes per hour and 360 degrees per circle has to do with the Babylonians. For beginners they used 60 as their base number instead of 10. You see we take something for granted and that is: we are using base 10, but not everybody is/was.

So another question then before some answers: Why do we use base 10?

The short and mostly valid explanation: because we have 10 fingers.

OK, I can almost here you think but I know you are too scared to ask… “So why did the Babylonians have base 60?”. BECAUSE THEY HAD 60 FINGERS! Sorry, couldn’t resist, here’s the truth:

So in order to count time, the Babylonians used 60 as a unit of measurement (read more in the article), I’ll just post the conclusion here:

“Despite occasional suggestions that we should adopt decimal time, this ancient system of measurement has survived for thousands of years. And so, the reason there are 60 minutes in an hour is due to the mathematics of the Sumerians, Babylonians and Egyptians and the structure of the human hand.”

So why wasn’t a day divided in 60 hours then too?

It appears there is not reason behind all of this. Somewhere long ago Egyptians started out to divide daytime and nighttime in 12 hours each of varying length (!). Apparently this was not only related to 12 having a large numbers of factors too, but also to the number of decan stars (a decan star rises just before sunrise) seen during summer nights in Egypt (is this related to the 12 signs of the Zodiac as well? My eyes are getting a little bit misty). So through the ages this turned in to 24 fixed hours a day, 60 minutes an hour etc.

Intermezzo: 24 hours a day and 60 minutes an hour are all conventions established by mankind, so how about a day and a year then?

Well they have other origins as you already know (from the dictionary):

Another intermezzo then, what’s the deal with leap years?

From wikipedia: “A leap year (or intercalary year) is a year containing one extra day (or, in the case of lunisolar calendars, a month) in order to keep the calendar year synchronized with the astronomical or seasonal year. For example, in the Gregorian calendar (common calendar), February in a leap year has 29 days instead of the usual 28, so the year lasts 366 days instead of the usual 365. Because seasons and astronomical events do not repeat in a whole number of days, a calendar that had the same number of days in each year would, over time, drift with respect to the event it was supposed to track. By occasionally inserting (or intercalating) an additional day or month into the year, the drift can be corrected. A year that is not a leap year is called a common year.”

Well first of all, 360 degrees is not the only way to divide a circle. There are grads (gradients), rads (radians), but we’ll get to those in another post. Let’s stick with the 360 first. Some say it was because “ancient astronomers noticed that the stars in the sky, which circle the celestial pole every day, seem to advance in that circle by approximately one-360th of a circle, i.e., one degree, each day” (according to wikipedia).

Although a full mathematical proof -of why 6 triangles in a circle all have sides with the same length and that length is equal to the radius of the circle- is not within the scope of this post, I will demonstrate why this is so through a few simple drawings: 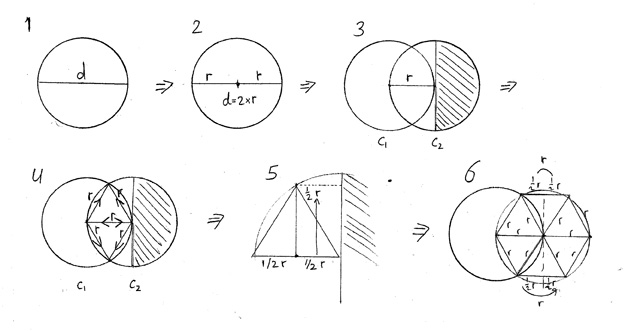 1) displays a circle. The width of the circle is called the diameter ofcourse, and this is the maximum length of a straight line that you can fit within the circle.

2) The diameter is twice the radius, the distance from the center to the edge of the circle.

3) So if we overlap two circles, so that circle 1’s edge intersects c2’s center and vice versa, the distance between c1’s and c2’s center is r. A line perpendicular to this r through the circles center, divides the circle in half (any line through the center ofcourse).

4) we can see that if we draw additional lines from c1’s center to the two points where c1’s and c2’s circumference intersect, that the length of those lines are r too. Vice versa for c2’s center to the intersection points. And already we can see 2 triangles of which all the sides have length r.

6) If we mirror what we have done so far across that boundary we drew in image 3, we end up with 6 triangles, forming a hexagon, in which the length of the top and bottom sides are 2*r/2 = r as well. So 6 triangles then, with all the sides having length r.

So know we know why: